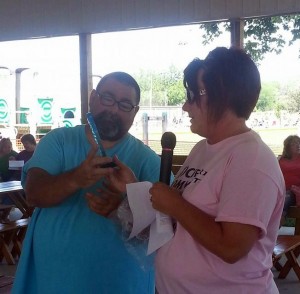 Growing up he could always be found with the neighborhood kids playing a game of football or whatever sport was in season. In high school, Pat played tackle for the Van Wert Cougars football team. He attended college 1 year at Bluffton College with the goal of becoming a physical education teacher /coach. He has always been a sports enthusiast. Whether cheering at a live game, watching a televised game or participating in the game himself , sports has always been a passion of his. Fast forward a few years to 1993 when Pat married a local hometown girl, Monica (Sill) Agler, daughter of Jerry & Marjorie Sill. Pat became stepdad to Jennifer (Moody) Burker & Spencer Moody. Later Pat & Monica welcomed their daughter Amy Jo into the world.

When Pat became disabled in 2001 he was devastated. He had always enjoyed very active lifestyle. He enjoyed participating in bowling, softball leagues and taking family walks/ bike rides. During this transition phase we decided to downsize and made our home in Rockford. As God worked it out we purchased a home near Shane’s Park in 2004. Pat wanted to become involved in the community. He took on the role of grounds keeper of the ball diamonds at Shane’s Park for 3 years.

During his time at the park, Pat developed a “shadow” in Cody Depweg. Cody enjoyed tagging along with Pat helping him with the bases & lining the fields. Pat took great pride in his work and keeping the fields in tip top shape. While his pace was slow his technique was flawless. Rockford was able to host games when other locations cancelled due to flooded fields. Pat also designed the Shane’s Park Softball/Baseball logo which hangs on the concession stand at Shane’s Park. After a time it became too much for him to manage but he had acquired a new hobby; photography.

He found great joy in getting the action shots at baseball games. Being such an avid sports fan he soon found the rhythm of the game and could predict the plays. That, he says is what helps him get some of the awesome shots. ” You have to anticipate where the ball is going and be in position for the shot.” He made fast friends with the Athletic Director, Doug Hughes and was thrilled when he was allowed to snap pics at the local high school sporting events. Hands down, football is his favorite because he played the game himself. “Nothing like being under the lights on Friday night with the adrenaline pumping and the fans cheering.” Pat launched his website: www.pantherzden.com in 2007. There he would post pix of Parkway High School sports. He also includes stats of the games and a brief story line. The site changes w/the Fall, Spring & Winter sports seasons.

This website is very time consuming, challenging, yet rewarding. The pantherzden website is a great resource for parents, grandparents, etc. to view their student in action. Pat has received so many kind words from folks saying how much they appreciate the website. It is a wonderful opportunity to put a spotlight on our school, community, and students. Many Parkway alum check in to see how panther sports are going. Family members far & near can see pics of their clan and feel like they were at the game. His website is not sponsored by the school or community.

All of his picture posted on the site are free for the taking. He is very clear about his calling. He will tell you quite simply, ” God put this camera in my hand. Photography is my gift, my way to give back.” Pat’s website gives back to the community that so graciously accepted him in. He counts it a privilege to attend the school sporting events and cheer on the Panthers. He may have been born a Cougar but he is a proud transplant and loves his Parkway Panthers! In addition, Pat’s action shots have caught the attention of local paper, The Times-Bulletin. He shares his photos with them and in turn, Parkway gets some great press in the local paper. Pat has traveled to support our Parkway Alumni as they play college sports as well. He has had the joy of watching: Jordan Thompson, Kelsey Bates, Dillon Long, and Josh Fisher to name a few.

Pat can also be found at community events such as Rockford Days, Sock Hop @ The Belle, Business Expo and the Memorial Day Parade snapping pictures. Watch for those on Parkway Independent. He has taken photos for Youth for Christ , the recent Attaboy concert held at Parkway and other school events as well. In addition he has shared his talent by assisting with images for Chamber events and the Rockford Alive website. As former president of the Grand Lake Photo Club he brought awareness to the area agriculture.

Pat is most deserving of this honor. He is a person with a big heart always willing to lend a hand. He continues to give back to the community through his pictures.